Institute of Atomic Energy performs activity to substantiate the establishment and development of national nuclear industry. Within this area, following works are carried out:

– experiments to produce reactor core melt (corium) and its moving towards the objects tested;

– experiments to study interaction between the melt and water ;

– experiments to study interaction between the melt and «dry» concrete trap;

– experiments to study interaction between the melt and reactor bottom material under supply of the water for cooling down outer surface of bottom mockup and simulation of residual heat in the melt;

– experiments to study interaction between the melt, water and concrete when the water coolant is supplied to the melt surface inside of the concrete trap and simulation of residual heat inside of the melt by means of electrical heaters. 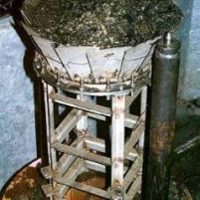 Solidified corium after interaction with coolant 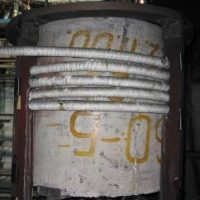 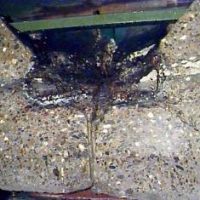 Cross section of the concrete trap with the solidified corium 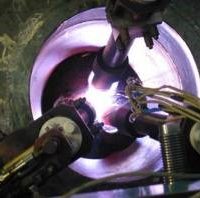 Simulation of residual heat release in the melt

Qualitative and quantitative database has been prepared which is essential to predict the progress of severe accident and to formulate the measures limiting and isolating its consequences.

Currently, IGR reactor and EAGLE test bench is involved into experiments to substantiate the conception of controlled moving of fuel melt in fast reactors to prevent recriticality at severe accidents with core melting.

– melt cooling down in sodium pool. 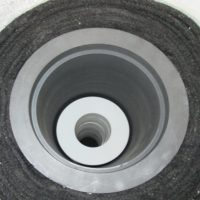 Top view on graphite crucible with rings of aluminum oxide 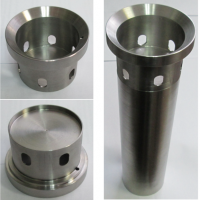 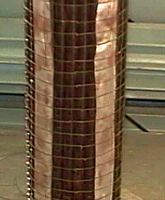 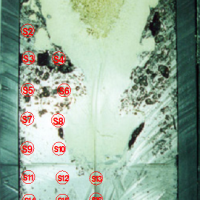 Cross section of upper melt trap after experiment with UO2 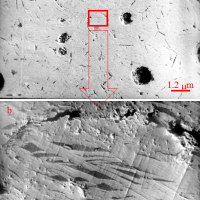 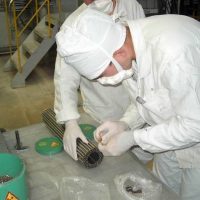 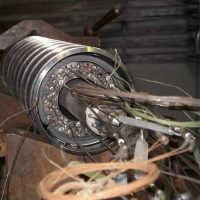 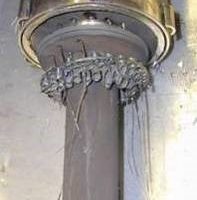 Part of inner pipe and FA after experiment 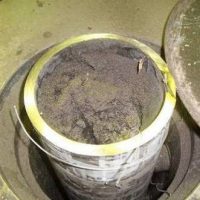 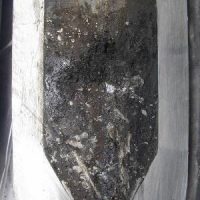 Longitudinal section of the trap after experiment with sodium

The purpose of the INVECOR Project (IN-VEssel COrium Retention) is to improve the feasibility for the safe retention of melt in a light-water reactor vessel under severe accident conditions by means of experimental modeling of thermal and physicochemical processes during retention of a pool of molten prototype corium on the bottom of a water-cooled reactor vessel.

For the experiments, the Lava-B faciliuty was used, equipped with an induction furnace for producing a melt of 60 kg of prototype corium and a device for receiving a drained melt (MR) containing a water-cooled model of the bottom of the reactor power vessel, a device for simulating residual heat release with a power of up to 90 kW and a set of sensors temperature, pressure and deformation.

The main results of the Project: new experimental data on the final structure of the corium pool with natural convection when simulating residual heat release in fuel and ablation of the vessel bottom model with different melt compositions and thermal loads on the wall in a 2-D configuration with a real curvature of the reactor vessel bottom. 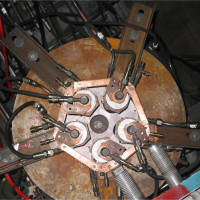 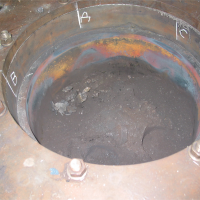 The overall goal of the CORMIT (Corium and Refractory Materials Interaction Test) Project is to prepare for and carry out experimental researches on corium interaction with refractory materials which could be used as potential protective material for under-reactor melt trap. These researches enable to choose appropriate refractory coating material for under-reactor traps normally intended for enhancing safety of Japanese NPPs in case of severe accident with reactor core melting. 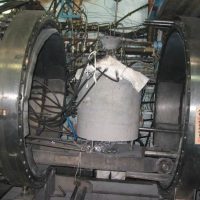 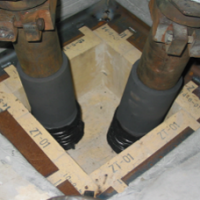 Melt trap with blocks of refractory materials: before experiment 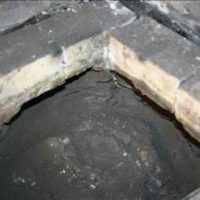 Melt trap with blocks of refractory materials: after experiment

The purpose of the Project: to produce solidified melt of fuel and structural materials of reactor core and further study of their properties. The data on the structure and physical and mechanical properties of resulted corium prototype are necessary for development of a debris removal procedure from damaged Fukushima reactors and selection of appropriate tools.

Solidified melt ingot in the trap after the experiment 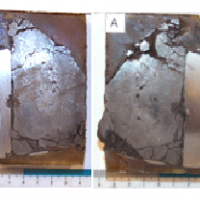 In June 2019, a seven-year contract was signed between the National Nuclear Center of the Republic of Kazakhstan and the French Alternative Energies and Atomic Energy Commission (CEA) for the preparation and implementation of the SAIGA Project (Severe Accident In-pile tests for Generation IV reactors and ASTRID project) on the basis of the IGR reactor, aimed at studying the development of a severe accident in the core of the promising ASTRID reactor of French design.

Within the framework of this Project, studies of FA degradation of a sodium-cooled fast reactor equipped with a device for removing molten fuel from the core will be carried out. This test should be as representative as possible of the phenomena occurring during the sequence of events accompanying the development of a severe unprotected loss of coolant flow (ULOF) accident.

For the experiment, a sodium loop will be created, which will provide sodium flow inside the model FA, close to the nominal one in the ASTRID reactor. During modeling an emergency decrease in sodium flow, the IGR reactor will maintain a constant energy release in the fuel of a FA, as a result of which the FA will be destroyed with melting of the cladding and fuel of the fuel elements. The main purpose of research is the process and parameters of the propagation of this molten material in the FA.

Diagram of an in-pile device with a model ASTRID FA 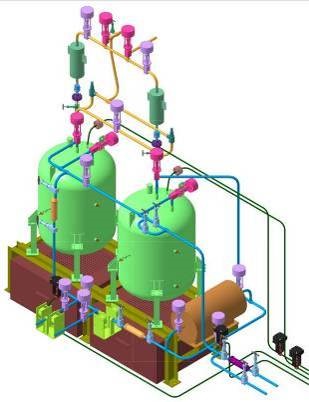 On May 27, 2016, a meeting of the ME RK delegation was held in Moscow headed by Erlan G. Batyrbekov, Professor, Doctor of Physical and Mathematical Sciences, Director General of the RSE NNC RK, with management and leading specialists of the N.A. Dollezhal NIKIET, JSC (headed by Yuri G. Dragunov, Director and Designer General, RAS member-corr., Professor, distinguished designer of RF, D.Eng.Sc.), where it was discussed the issues of advanced scientific and technical cooperation when substantiating thermo-technical reliability of fuel elements and FAs of reactors like BREST and BN-1200, the main designer of which is NIKIET JSC.

Thus, close cooperation between RSE NNC RK and NIKIET JSC starts on preparation and implementation of research to study behavior of fuel elements with mixed nitride uranium-plutonium fuel of BREST-OD-300 under fast processes with increasing of energy release.

The main purpose of the tests is to determine threshold values of thermal loads leading to damage of claddings and fuel of the fuel elements.

– 9 experiments at the IGR reactor have been implemented with 5 ampoule irradiation devices, each of them contained 3 fuel elements with SNUP-fuel of the BREST-OD-300;

– Experimental data were obtained for defining the values of destructive energy release and operating temperature limit for fuel element cladding;

– Import and export of irradiation devices to Russia have been conducted. 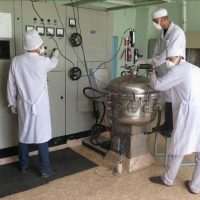 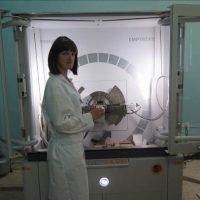 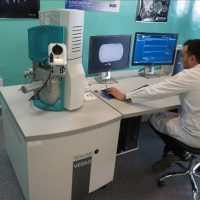 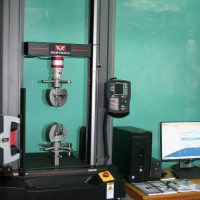 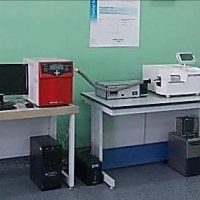 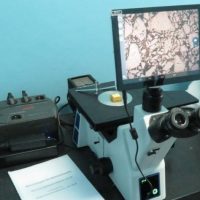 The section of optical metallography 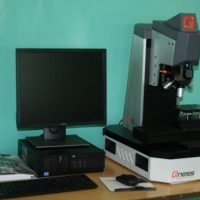 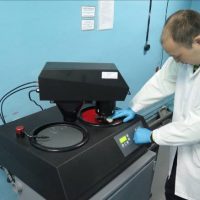 The section of metallographic preparation equipment

To implement these objectives in the IAE there is unique experimental equipment and material research laboratories (material testing complex) located at the Complex of Research Reactors Baikal-1.

The IAE has well-outfitted material testing complex able to solve above research tasks.